Producing a very good amount of information at every customer touch-point is a part and parcel of every organization, be it private or public, small scale or large scale. For processing volumes of data, you need the best database for web applications. A database can be defined as a room where all the sensitive information, data, and reports are stored. As the information stored is extremely sensitive, you must be cautious in accessing it and about the data management system software you use.

The customary SQL list, which consists of NoSQL, NewSQL, and Cloud database has been the best database for web app development for some years now. All these have an ascent of Microservices, cloud-distributed apps, low latency data, and so on.

Mentioned below is the list of the best databases for web app development. You can use any of the databases mentioned here to support your project’s purpose. For example, Kamtech conducts career based upskilling training sessions at colleges to train novice students regarding the best database for web applications using Microsoft SQL Server. But once they excel in the database essentials, they move on to using MySQL and Oracle. On the contrary for our clients in multivendor ecommerce development and web app development we use any one the DBMS mentioned hereunder based on the client’s specific requirement and budget.

MySQL is one of the top contenders in the list of best databases for web app development. It mainly focuses on stability, robustness, and maturity. It uses a structured query language and is written in C and C++. MySQL's recent version, 8.0, contains a better recovery option, which means that it is now easier than ever to handle data-intensive projects from scratch to end.  If you are looking for a database with a variety of editions and a set of features, you can opt for MySQL.

PostgreSQL is an acronym of POSTGRES, which was the original name of the DBMS that stood for Parallel Object-Relational SQL. Postgre is a free open-source database for web app development that was developed by the PostgreSQL Global Development Group. It is used in several business areas such as gaming apps, domain registration, and database automation tools. This database management system was written in C and used to deal with huge amounts of data by many leading businesses.

If you are looking for a popular database system to use in 2022 through NoSQL, MongoDB is the best database for web applications. It is the first Document Database management software launched in 2009 which handles document data as compared to Relational data which RDBMS does. Before it was launch issues were being faced in loading and accessing data into RDBMS using Object-Oriented programming language. As it required additional application-level mapping. To tackle this obstacle, Mongo was developed to handle document data.

Redis is a popular database for web app development that is based on the prominent message queue software MQ. It is a primitive key-values store with optional durability or assuring messages between applications. Redis helps web app developers to solve difficult problems quickly along with providing support for advanced data structures. After solving one problem it then moves to the other projects alleviating the urgency to install and configure traditional database tools such as MySQL and PostgreSQL. Redis is also a distributed cache and message broker with durability as an option.

Elasticsearch is a prominent full-text search engine based on Apache License with a distributed, multi-tenant capacity and a REST API. It was released in 2010 by Shay Banon. Elasticsearch supports multiple data center replication and automatic indexing of documents. You can use it as per your needs and specifications in monitoring your logging data by leveraging the JSON functionality.

It is a completely MySQL-compatible database management system. It can be used interchangeably with MySQL without any code changes and both have the same origin.

The columnar storage provided by MariaDB has parallel distributed data architecture and if we compare MySQL with MariaDB, the latter is more community-driven.

It is a free database that supports SQL queries. SQLite is the most commonly used for web and mobile devices and is available on all major platforms. This is ideal for portable applications because of its cross-platform feature. The same JavaScript code can be used to run it on phones, browsers, and computers. Its lack of administration overhead, performance benchmark, release cycle, and features make it a popular database for web app development.

Neo4j is last but not the least in this list of best databases for web app development. It is an open-source as well as an object-oriented database management system. It creates a graph rather than a table and saves your data's relationship quickly for you to use later. It saves your time without affecting domain data.

A database is the part and parcel of developing a web application. The aforementioned is the list of the best databases for web app development that are being used by companies in 2022.

We are as enthusiastic as you to create tech-enabled solutions that could not only grow your business but change the world.

Over the years, we have helped 100+ businesses impact millions of people across the globe. We make enterprise-grade product development more accessible to entrepreneurs, helping them compete on a bigger scale while still staying nimble. 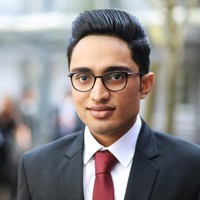 An engineering graduate from Germany, specializations include Artificial Intelligence, Augmented/Virtual/Mixed Reality and Digital Transformation. Have experience working with Mercedes in the field of digital transformation and data analytics. Currently heading the European branch office of Kamtech, responsible for digital transformation, VR/AR/MR projects, AI/ML projects, technology transfer between EU and India and International Partnerships.

Kamtech
Typically replies within an hour